If you keep your finger on the pulse of all things viral and pop culture, I’m sure you’ve already heard about a teenager from Reno, Nevada who tweeted Wendy’s with a proposition - how many retweets needed for a FREE year’s supply of nuggets. Wendy’s replied, 18 million.

In a span of a few weeks Carter went from 150 Twitter followers to 121,000 followers as of today.  Major brands and influencers, including Amazon, Microsoft, United Airlines and Tyler Oakley, joined in to help achieve his goal. Carter has received national publicity with coverage in People.com and has entered into a a personal Twitter challenge with Ellen DeGeneres. The deal was that he couldn’t kick Ellen out of first place with most retweeted selfie, her famous 2014 Oscars selfie. On May 9, Carter officially beat Ellen surpassing her retweets. 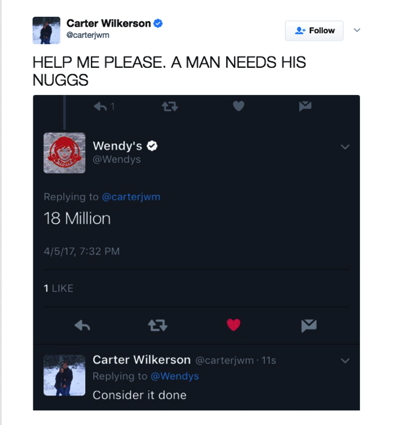 So what are the top 3 PR lessons coming from this story? Here goes.